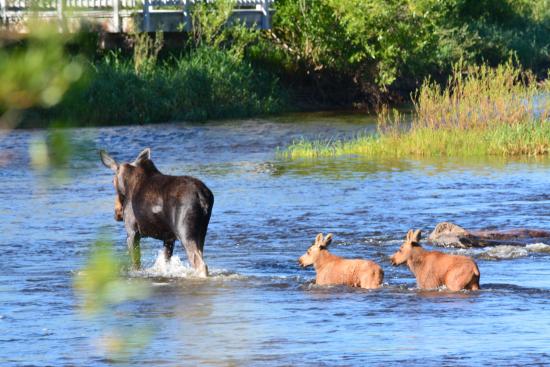 The unspoiled waters and banks of the Yampa fosters a flourishing natural habitat for a wide range of native animals including river fish, mammals, and waterfowl. Considering the variety and sheer numbers, it’s likely you’ll see wildlife during your day on the river. The Golden Rule of an animal encounter is give them their space: don’t disturb them, maintain a reasonable distance even if it would make a really good selfie.

DO NOT FEED THE WILDLIFE. Don’t even leave food on the ground. Many animals, bears in particular, get used to “people food.” This can lead them to dangerous behaviors such as wandering into town, breaking into dumpsters and cars, and even pose a threat to people. If this happens, animal control officers have no choice but to euthanize it. Remember: a fed animal could become a dead animal.

In some instances, the consumption of human food by animals can be detrimental to their health and sometimes even fatal. An example of this is feeding ducks and other waterfowl bread crumbs, bread is low in nutrition leading to malnutrition and shortened life spans.

Should you encounter a moose or elk, keep your distance and leave immediately. Even though moose and elk aren’t meat-eating predators, they are known to be aggressively territorial and fiercely protective of their young. Should you encounter one: back away slowly, then run as fast as you can to the nearest tree or other strong object to use as a barrier.  Don’t leave until the moose or elk has left the area.

Should you encounter a bear, there’s a 9 out of 10 chance it will immediately flee from you. However, should the bear choose to stand its ground, Do Not Turn Your Back And Run. Despite a bear’s massive size, it can still run faster than you can, and turning your back and running can potentially cause the bear to recognize you as prey. If you run it will chase and catch you. Instead, yell and make as much noise as you can. Pick up a stick and shake it above your head to appear bigger than you really are and back away slowly. If you have a spray-can of bear mace or other deterrent, have it drawn and ready to use, but only use it if it’s absolutely necessary.

There are no upcoming events at this time.